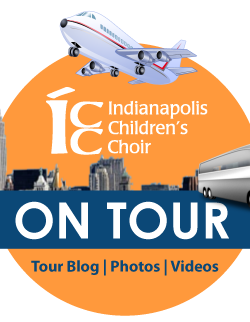 On Friday, May 8, the Indianapolis Youth Chorale boarded three separate planes bound for New York City to perform at Carnegie Hall as part of the National Festival Chorus.

Before the concert at Carnegie, however, there was much touristing to do in the city. Upon arrival, IYC singers first visited the Empire State Building. On Saturday, between rehearsals for the concert, they were also able to meet and have dinner with New York-based ICC alumni and to take in a Broadway show (Jersey Boys).

Sunday was the big day. After sound checks, the choir worked with composer John Conahan on his piece, Ave Maria. Mr. Conahan spoke with the singers about himself and the piece, describing its background and inspiration. Working with Mr. Conahan made a huge impression on the IYC singers. They were inspired by the privilege of being able to hear from and speak with a national-level composer about his own piece, which they were to perform.

Then came the concert. This was an extremely emotional occasion for the choir. It was their first tour without the beloved Cheryl “Mama” West, the IYC’s long-time director and mentor – Ms. West died unexpectedly in September, leaving the entire ICC community mourning, most of all her IYC singers. And the Carnegie concert just happened to fall on Mother’s Day.

The IYC delivered in full force.

Co-directors Henry Leck and Mary Evers (it was Ms. Evers’ first time conducting at Carnegie) were incredibly moved by the power of the IYC singers’ performance. “The stamina, discipline, joy, compassion, and artistry was almost beyond the realm of reality,” Mr. Leck told the choir after the concert. “Standing before you and leading your artistry was one of the great thrills of my life.”

After a post-concert reception, the singers were free to be tourists again for the rest of the trip. Central Park, the Statue of Liberty, the 9/11 memorial, and the Museum of Modern Art were among the many sites of interest.

Then came time to come home, to wind down and reflect upon the choir’s hugely successful trip.

Mama West would have been proud.

Alumni to Reprise Solo Roles at Voices of Youth (part 2)