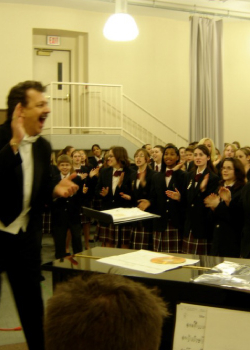 Tom Alvarez with Examiner.com recently sat down with Henry Leck for an intimate conversation about his work with the ICC.

In 1986, Henry Leck became founder and artistic director of the Indianapolis Children’s Choir, one of the largest children’s choir programs in the world. An internationally recognized choral director, Leck is a former associate professor and director of choral activities at Butler University in Indianapolis, Ind.

Prior to the ICC’s four holiday concerts which took place Dec.19 & 20 and a Jan. 3 “Alumni in Song” concert, in which over 100 alumni (they came as far away as Texas and Mass.) participated, Leck sat down with Examiner.com for a wide-ranging interview in his Lilly Hall ICC office at Butler University.

On January 2 and 3, the ICC and ICC Alumni Association held its first Alumni…