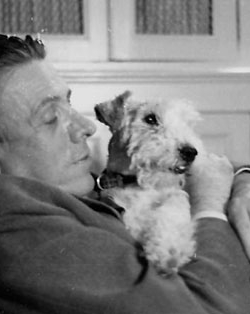 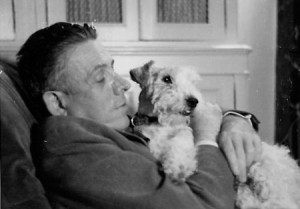 Francis Poulenc and his fox terrier at his home in France

Son of a wealthy family in Paris, Poulenc’s father was a joint owner in a pharmaceutical company. He was raised in a catholic family but in his early writing was known for his secular light heartedness. In 1936 a close friend was killed in a car accident. He was drawn back to his religious roots and began writing significant sacred music, excelling in his writing for the voice.

The “Gloria” is one of the century’s most performed large scale choral works
It was commissioned by the Koussevitsky Music foundation for the Boston Symphony and written in 1960, with its premier in 1961.

There are beautiful melodic lines in the orchestra and there are fun repeated phrases in the choir. He employs dissonances for coloristic effect. He loves using seventh and ninths chords, often a tonic major seventh chord.

The work is challenging yet accessible, contemporary, yet singable, introspective yet joyous. Rather than ending with a gigantic and climatic conclusion, it ends very quietly and serenely with an amen.
Peter Gutmann
from Classical Notes says:

“If you fear classical religious music as long, grim and boring, don’t
worry – Poulenc charges constantly ahead through a dense but joyous
kaleidoscopic journey. The fourth movement, lasting barely a minute,
is woven from no fewer than a half-dozen evanescent melodies.
Like a well-structured pop song, it’s over so fast you just want to hear it again.
There’s nothing intense or prolonged here – in deference to modern attention
spans, Poulenc effortlessly careens among moods of elation, wonder and
contentment.

The last minute encapsulates both Poulenc’s genius for seemingly effortless
efficiency and the depth of his surface simplicity. It’s a disarmingly plain yet
multi-layered and overwhelmingly effective exploration of the multiple
implications of “Amen.” A lush meditative mood is broken by a brisk
Amen of the full chorus, followed by a sharp orchestral chord, thus
reinforcing the traditional use of the word as marking a definitive end to prayer.
But then a solo soprano glides through a loud, sinuous Amen, wandering
desperately until, at the end of her breath, she settles on a final note of doubt,
ancient in its chant-like sound but modern in its brash, questioning spirit.
The chorus then intones a soft, lushly-harmonized Amen of reassuring peace
and eternal calm. Barely audible, the soprano suggests one more Amen in a
challenging bittersweet suspension of eternal unresolved mystery.”

The performance will be done by the Indianapolis Youth Chorale and New World Youth
Orchestra under the baton of Henry Leck. Our guest soloist is Amelia Keenan an ICC alumna.

The “Gloria” is being performed as part of:

The ICC is joined by special guests the New World Youth Orchestra for an evening of artistic collaboration. In the acoustic splendor of Sts. Peter and Paul Cathedral you will hear one of our advanced choirs singing with orchestra.

ICC Alumna to be Featured at Sweet Melodies Concert

A simple way to give! This holiday season, you can support the ICC while shopping…

We are pleased to announce a new member of our board. Julie Hipsky is accounting…