Jubilate Shines in its Debut Performance 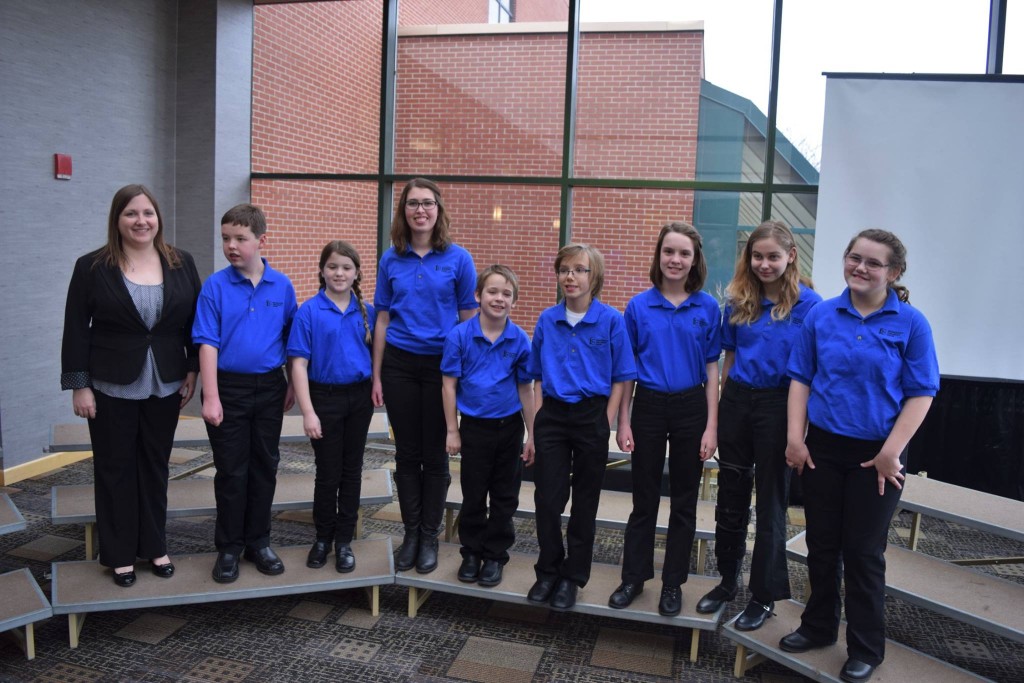 The ICC’s Jubilate choir – a choir program for children with special needs – is in its third year of existence, under the direction of ICC Director of Outreach and Early Childhood Programs Lauren Southard. This past January, the group reached an important milestone: it had its first public performance, at the Indiana Music Education Association conference in Fort Wayne.

Cheryl Loggins – Jubilate’s choir coordinator – has had two of her own children in this choir, one of whom is currently a member (she also has a third child in one of the ICC’s performing choirs). She accompanied Jubilate to the IMEA conference, to help ensure their big day was a success.

A huge success it was, too. From the excitement the young singers felt at traveling to Fort Wayne on a charter bus (one singer exclaimed, “We get to ride the bus and tour with ICC!”), to taking the stage both on their own and alongside Cantantes Angeli (one of the ICC’s advanced performing choirs), Jubilate’s debut performance was something truly special.

“They were part of the group,” said Ms. Loggins, adding, “It was a real tear-jerker.”

Indeed, several of those in attendance were brought to tears by the joy of the experience. Here are a few comments people had:

“Today, at IMEA, was one of the most touching performances I have seen since we have been a part of ICC. Watching Jubilate having their first opportunity to sing on the big stage was simply spectacular.”

“A special day for these special kids, and a proud day for everyone and ICC.”

“This was an amazing experience for them. Thank you ICC for giving them this opportunity.”

And just a few months after their public debut, the singers in Jubilate will soon have a second opportunity to take the big stage with the rest of the ICC, at the 30th Anniversary concert in April.

Ms. Loggins – who is on the board of the ICC Parent Association, has been a performance coordinator, and chaperoned ICC choirs on tour, a true all-star choir mom – noted how different her experience with Jubilate has been from anything else she’s done with the ICC.

“It’s more personal,” she said. “You have to know each singer better. They always make you smile.”

And for everyone who does, it’s a privilege to know each of the wonderfully unique kids in Jubilate.

A Note from a Current Singer

A Note from a Current Singer Veteran ICC singer, Noah Boehm, shares his thoughts on…

ICC Alum, Phebe Taylor, Checks In with the ICC

Many people who sing in the ICC go on to do great things, and we…

Ella Doesn’t Talk, But She Can Sing!

by Alyssa Prazeau, ICC Jubilate Parent When I tell people that my daughter, Ella, is…