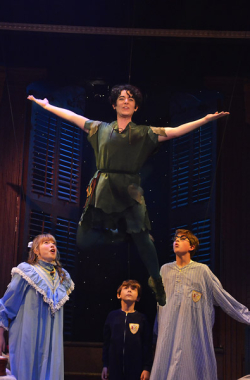 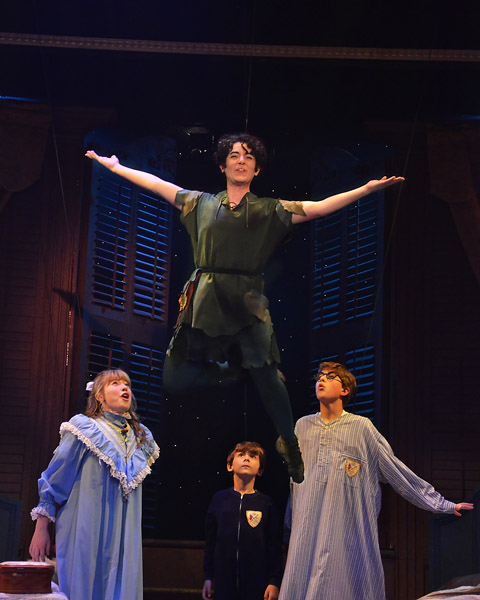 Many people who sing in the ICC go on to do great things, and we love to catch up with alumni years after they’ve left the choir. ICC alum Phebe Taylor starred in the Beef and Boards’ production of Peter Pan this summer. Phebe had some time to speak with us about what the ICC has meant to her.

On her experiences in ICC:

I was in ICC/IYC from 1989-1998, so basically the Choral Festival after Third Grade until I graduated from High School.  During my first three summers in college, I also worked in the ICC office.  During that time, I toured to New England, Colorado/Nebraska/South Dakota, ACDA in San Antonio, England, Scotland, Australia, New Zealand, Hawaii, Italy, Germany, and Switzerland.  We also did a bunch of smaller trips, concerts, and conventions…It is hard to say what my favorite memories were, because I remember most of that time vividly and quite fondly… Touring and doing things like singing for the Pope are obviously memorable, but I also can’t forget so much that we did here at home.  I loved recording at Airborne Studio.  Singing for the Indianapolis Symphony Prairie Fourth of July Concerts was so fun. We felt so important singing for William Hudnut’s retirement. Recording the “Imagine Indiana” film for the Children’s Museum and hosting Hungary’s Cantemus Children’s Choir also come to mind.

Most of all I remember the friendships. I don’t do Facebook, but I still am in contact with many ICC friends, because those bonds were so strong, probably stronger than those with kids from my own school.  Most notably, I became very close friends with my homestay from the National Boys’ Choir in Australia when we were in Melbourne in 1992. I have been back there twice to visit (including attending the oldest son’s wedding in 2009), have seen them here in the US several times, and even met up once when we were both in the UK!  We almost always talk around New Year’s Eve/Day and have been even scheming recently for a visit in the near future!

Where is she now?

After graduating from North Central High School, I went on to study music theatre at the Carnegie Mellon University School of Drama.  I’ve been living in New York City for 13 years and have been working as a professional actor since I got there.  Luckily, I get to come back to do a show in Indianapolis about once a year, most often at the Phoenix Theatre and with the Heartland Actors’ Repertory Theatre.  I love coming back here–there is such talent and heart in the Indianapolis theatre community!

I also work with a touring theatre for young audiences company that is based in New Jersey, that presents family friendly and common core aligned shows to school and public audiences all over the country.  We’ve even had three residencies in Anchorage, Alaska!

I have my New York City Sightseeing Guide License, and when I am not performing, I am often showing people around NYC! I try to get back to Indianapolis even when I am not working on a show, especially for the 500 and Gen Con (my husband and I LOVE playing board games)!

On ICC’s influence on her life:

I know ICC helped me to be vocally flexible.  Singing all of the different styles of music helped me develop a good ear. Learning accents and dialects is pretty easy, because I can hear all of the subtle sounds. I also have a pretty wide singing range, because we always had to sing in a wide range. In ensembles, I am often given the hardest vocal part, because not only do I learn it pretty quickly, but I can hold my own.

I also only recently noticed that I care very much what I look like. I don’t mean in a vain way, but I always want to look my best. I always think about appearing appropriately and respectfully dressed for every situation and person I will come across in a day. I think that the discipline in maintaining our formal and informal uniforms and adhering to concert and tour dress rules while in ICC, heavily influenced my desire to always look presentable!

Advice for young singers in the choir now:

I guess that perhaps some ICC singers struggle with the commitment, especially when school, sports, family, etc. seem to conflict.  Sometimes it’s hard to get to all of the rehearsals and concerts, but sticking with it is so worth it – the friendships, the touring, the music, the music education, the discipline, are all experiences that 25 years from now will seem invaluable, even if they don’t right now!

In October, Cantantes Angeli (CA) performed the world premiere of From Rivers, composed by Caroline…

From ICC Camper to Teacher