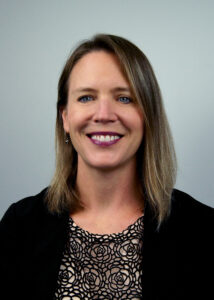 Amy Hoffman Hughley is the Associate Artistic Director of the Indianapolis Children’s Choir. In 2013, she first joined the ICC staff as director of Bella Voce, the all-female ensemble of the High School Division. Currently, she co-directs the Master Chorale, ICC’s sole high school division ensemble, as well as the Anderson Youth Chorale. She also oversees the ICC Preparatory and Beginning Level Choir programs, and assists Artistic Director Joshua Pedde. In addition to her roles at ICC, she also teaches private piano lessons, instructing students of many ages and abilities. She has also served as an adjunct faculty member at Butler University, where she taught secondary choral methods courses to music education majors.

Hughley taught high school choral music in Georgia for 14 years, where she directed five choirs and taught both Advanced Placement Music Theory and International Baccalaureate Music. In 2011, she was named Riverwood High School’s Teacher of the Year. She was elected president of the Georgia American Choral Director’s Association (ACDA) in 2013, and her choral articles have appeared in national and state ACDA publications. She also served on the board of the Indiana Choral Directors Association (ICDA) from 2014 to 2018, as well as the Repertoire and Standards Chair for Men’s Choirs in Georgia from 2010 to 2012.

Mrs. Hughley’s choirs have been selected to perform at the ICDA Conference in 2017, the American Choral Directors Association (ACDA) Southern Division Conference in 2010, and the Georgia Music Educators (GMEA) In-Service Conventions in 2008 and 2011.

Mrs. Hughley has been a choral clinician and adjudicator for several honor choirs and festivals throughout Indiana and Georgia. She received her Masters of Music Education from The University of Georgia and her Bachelor of Music degrees in Music Education and Piano Pedagogy from Westminster Choir College in Princeton, New Jersey. During her undergraduate studies, she was a three-year member of the Westminster Choir, where she toured to Korea, Taiwan, and France, and sang in many of the operas performed at the Spoleto USA Festival in Charleston, South Carolina. She studied piano with Ingrid Jacobson Clarfield, voice with Laura Brooks Rice, and conducting with Joseph Flummerfelt, James Jordan, Andrew Megill, Allen Crowell, and Melanie Jacobson. She has led seminars on piano music at Westminster Choir College, and she taught High School Piano Camp at Westminster Choir College for eight summers.

Mrs. Hughley lives in Indianapolis with her husband, Brad, and her daughter, Katharine.