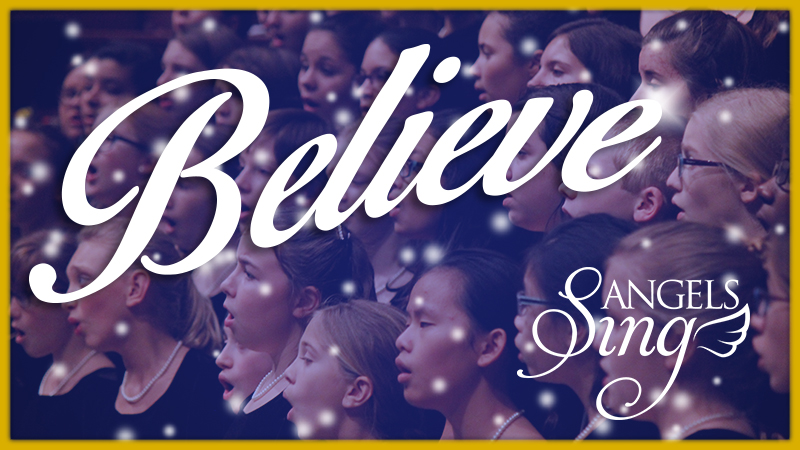 Joshua Pedde knew he wanted his first Angels Sing concerts as the ICC’s artistic director to be special. One of the first things he needed to figure out was the programming. What song selections would make these holiday concerts unique and meaningful?

“I was reading through music, and I saw Believe in the pile,” says Mr. Pedde.

Believe is a song from the 2004 animated Christmas film The Polar Express. It was originally performed and recorded by Josh Groban.

But then some text from the piece caught his eye.

“When it seems the magic slipped away, we find it all again on Christmas Day. Believe in what your heart is saying. Hear the melody that’s playing. There’s no time to waste. There’s so much to celebrate. Believe in what you feel inside, and give your dreams the wings to fly.”

He began reflecting on some universal things people believe, especially around the holiday season. “We believe in family and friends. We believe in celebration,” he says, “and we believe in love.”

And suddenly, not only did Mr. Pedde have part of his programming, but he had a theme for the entire concert.

“During the holiday season, no matter their religion or ethnic background, people seem to act a little differently,” he says. “There is a magic. There’s a hope.”

Mr. Pedde has a few hopes of his own.

“My hope is that the music will reflect the things we each believe in,” he says, “and also remind us of those past holiday seasons when we ‘believed what our hearts were saying’ and we’re able to ‘find it all again.’”

NOTES FROM MRS. DWYER WOW!  Great dress rehearsal on Wednesday.  Thank you for adjusting your…