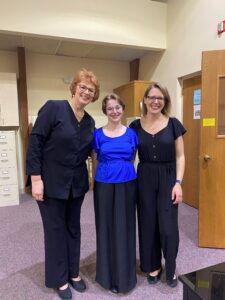 Sixteen-year-old Lison Rose Delphine Luyckx had never been to the United States before, had not been to a U.S. high school, and had never been in a choir. All of that changed for her in 2021 when she came to the states as an exchange student at Herron High School in Indianapolis. Her host mom, Teresa, knew that Lison loved music and suggested that she sign up for the Indianapolis Children’s Choir, and she was accepted into Master Chorale. Teresa had her own singer in the ICC and knew what a great experience it can be for young singers.

Prior to joining the ICC, Lison was enrolled in a music-based high school and middle school at home in eastern France close to the Swiss border. Students were grouped together into ensembles of 4-8 based upon ability, age, and an audition process. Instead of the choral repertoire that the ICC offers, these student groups usually had only one or two singers each and focused on pop and rock music. Lison noted that there was no opportunity to join a choir, there just simply isn’t availability in her area for something like the ICC. “This experience was very different for me, I learned a lot about my vocal abilities and how to balance my voice with others,” Lison explained. 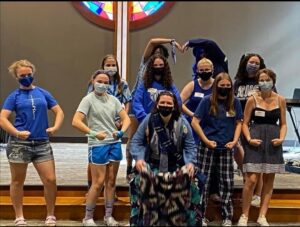 To make the leap to a choir experience, Lison was a bit nervous, especially because many Master Chorale participants had been singing together for years. She was pleased to find an inclusive environment noting that, “Early on, most people already knew each other, but people opened up and welcomed me into the group as a full part of the choir.” She made several friends outside of her U.S. school through ICC that she plans to keep in touch with now that she’s returned to France.

Overall, being in Master Chorale for just one season opened up opportunities for Lison—not just musically, but culturally, and in other ways too. She noted not only the friends and music, but a personal change in her own confidence level in herself and in her voice.

Lison’s time with the ICC in Master Chorale came to an end in May 2022 as she performed a major choral work with her fellow singers. “The final concert, Vivaldi’s Gloria, was the most meaningful to me because it was the last one of the season, but it was also challenging. It was very nice music with a very pretty sound, and I liked each one of the pieces.”

What a wonderful display of the ICC community welcoming a new member from across the globe for a meaningful season of song! Best wishes Lison, and thanks so much for sharing your story with us.

by Henry Leck, ICC Founder and Conductor Laureate This is a story of the really, really, raw…

Called to Be a Cantor

Alumni to Reprise Solo Roles at Voices of Youth