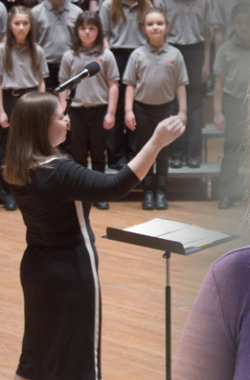 From Singer to Director to Composer for the 30th Anniversary

Saturday, April 30 will be a day of many pivotal moments for the ICC. We will celebrate legacies – that of Founder and Artistic Director Henry Leck, as well as that of the ICC overall. We will celebrate the future by welcoming incoming Artistic Director Joshua Pedde into his new role. It’s going to be one of the most momentous events in ICC history.

The 30th Anniversary Concerts will be celebrated by many people who have been a part of the ICC for most of their – and the ICC’s – lives. One such person is Leeann Starkey. As a singer, Leeann auditioned for the ICC in the summer of 1996 and joined a beginning-level choir that year. As she grew as a person and a musician, her eight years with the ICC helped give her a passion for music education and a desire to become a teacher.

While Leeann was studying music education at Butler University, she stayed close to her ICC mentors, and spent her summers helping teach at Choral Festival. During graduate school, she began assisting with ICC choirs and teaching Preparatory classes part-time. Eventually her role with the ICC had grown so much that she was teaching outreach and early childhood classes, directing Preparatory choirs, running the music library, and overseeing the Choral Festival operations.

Now that Leeann is currently pursuing her primary career paths outside the ICC, she remains a very close member of the ICC family, and is one of several people premiering newly composed pieces at the 30th Anniversary Concerts. As a composer, she has already seen some of her music performed by the ICC, including her choral settings of the texts of William Shakespeare and Edgar Allen Poe.

Leeann’s new piece, When I Sing, which will see its world-premiere at the 30th Anniversary Concerts, didn’t come to her easily, at least at first. “I wanted it to speak to the joy that singing brings,” she says. “The joy of singing that the ICC instilled in me at such a young age.”

Then three simple words came to her: when I sing. “The melody and lyrics came fairly quickly after that,” she says.

Leeann is proud and excited to unveil her piece at this huge occasion for the ICC. “In my mind, it serves as a thank you to the organization for its influence in my life,” she says. “I am so grateful to be a part of it.”

And we are grateful for her.

Henry Leck Changes Kids’ Lives One Song at a Time

Tom Alvarez with Examiner.com recently sat down with Henry Leck for an intimate conversation about…

CICC Alumni Night December 13: Christmas! We will have a special moment for you at…

SarahEmily Lekberg is the Indianapolis Children's Choir Chapter President for the Boston/New England area. You…